How a RFID Sticker Can Benefit Your Business

What Python Programming is All About 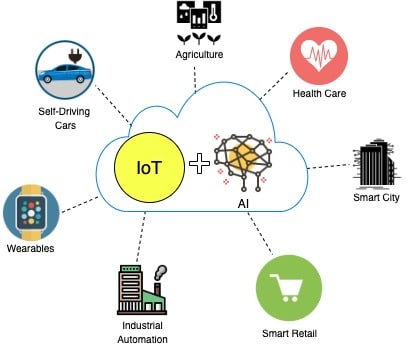 What is IoT? And its future!

The “Internet of Things” – IoT, technically described as an electronic device that is equipped with sensors, that sends data and receives instructions thanks to the internet connection. To describe in non-technical terms, billions of physical devices (with sensor) connected to internet all around the world. IoT have diverse application around all the sectors, to empower and enrich human’s life on this planet.

For example, let’s take a smartphone, you are listening songs using earphones connected to smartphone while you are busy with other things (driving), there comes IoT powered by (Artificial Intelligence) AI. Imagine IoT sensors in the earphones, that could take your heart rate data and with the help of AI it could predict your emotion. Based on that emotion your smartphone could pick the best song stored somewhere in the world. There are several million songs around the world and your smartphone doesn’t need to have super storage to store all the songs or either super computing power for the applied AI model for emotion sensing. All it needs to ensure is, it is being connected to internet.

According to Business Insider, there will be more than 41 billion IoT devices by 2027, up from about 8 billion in 2019. This survey was constructed by 400 responses from top executives around the world. Those companies include Alibaba, Alphabet, Amazon, Apple, VMWare, Verizon, etc. It further states that by 2027 all the devices that remain behind reaches to get the internet access, and the IoT market grow to over $2.4 trillion annually.

IoT combined with the most dynamic technology of Artificial Intelligence (AI) could possibly make the IoT system itself to become more smarter and can easily mimic the human’s activity.

Role of Artificial Intelligence in IoT

AI is defined as the process of making the machines intelligent enough to do the tasks without any human intervention. All the IoT devices together collects huge data and on the other hand to build a state-of-the art AI model it needs huge data. Thus, the combination of these two dynamic techniques makes the monotonous IoT into an intelligent IoT (smart tasks without human intrusion). The powerful combination of IoT with the AI can be a huge breakthrough in humans’ life.

So, when we talk about the Artificial Intelligence (AI), Machine learning (ML) and Deep Learning (DL) plays the more vital role since DL and ML are the subsets of AI.

Linear regression is applied when there is a linearity in the input data. For example, when the input x is changed there should be a change possibly in an output y. The equation that the linear regression model uses to train is given by Y = θ1 + θ2 X1. For example, take co2 emission in vehicles based on the engine size and number of cylinders. The emission rate has a linear relation with the engine size and number of cylinders.

Deep Learning (DL): Deep learning is a sub-field of machine learning, that was designed with the inspiration from human brain and called as an Artificial Neural Network (ANN). Thus, the advancement in deep neural networks makes it more sophisticated to react in real-complex environment faster than humans.

Artificial Neural Network: Artificial neural network was constructed mainly with three layers, they are input layer, hidden layer, output layer. The inputs from the first layer (input layer) gets multiplied by the weight and added bias. The bias and the weights are random at first. Then these values pass through some activation function (ReLU, Sigmoid, Tanh, etc) and then pass on to the next layer until the output layer. This iteration of process can be repeated until we get the optimum performance/accuracy.

Applications of Machine Learning to IoT

Today there are several ML algorithms applied in IoT. These ML applications highly depends on the applied field. There are several reasons why machine learning influences the IoT. But first what happens if IoT is implemented without ML? IoT has to face the following consequences when it is solely implemented without ML. That includes integration of data from multiple sources, device managements, handling huge volume of data and version controlling of applications.

IoT deals with the interconnection of devices with the main aim of sharing the information (data). These data were the standard reason that makes the ML more powerful, increasing the efficiency of IoT. The key factors that ML contribute to IoT are: to analyze the data and predict the future events, converting raw data into human understandable format, real-time recommendation system, maintenance of the devices (IoT), etc.

The process of making IoT intelligent and analyzing the big data produces by billions of such devices find an application in several fields. Such fields are self-driving vehicles, wearables, industrial automation, agriculture, health-care and retail shopping.

Industrial Automation: When it comes to the production lines in industries you need help of the automated robots. Robots that work alongside of humans called as the collaborative robots or cobots. The main disadvantage of them is that they function without the knowledge of any obstacles (Human’s) present in their environment. This situation could potentially cause lethal injury or death in case. In order to mitigate the physical damage to humans or to make the robots intelligent enough to aware of their working environment certain safety systems are in need. There comes the application of ML/DL algorithms with IoT, in developing the computer vision based intelligent safety system for collaborative robots.

Agriculture:  The world population is continuing to grow, In the next 80 years there will be addition of 3.6 billon peoples to the present population, So, there will be increased demand for the food. Thus, IoT and AI together improve the agricultural production with the following technologies,

Self-driving cars: Self-driving cars, is the future of automobiles. With the combination of IoT (sensors, cameras, LiDAR, RADAR) and Deep neural network it is possible to make the car drive by itself. There is an active research and development going on in this field, carried out by corporate companies like Tesla, Google, Uber, Volvo, etc.

Wearables and Health-care: Wearables could collect the raw heart rate, EEG, and human body motion data with the help of IoT-sensors embedded in it. The retrieval of these metrics can be translated into more accurate and tailored information, through the implementation of artificial intelligence, in order to increase the awareness of the health and fitness conditions, early disease detection and avoidance of the potential risk in the cardiovascular system.

Smart retailing: Make your shopping smarter! With the combination of IoT and AI, the consumer gets the smarter experience in online as well as in an offline shopping. With the help of AI, it could also help the retailer to understand the consumer buying pattern. The multinational clothing-retail company H&M has offered its customer a new shopping experience with the concept of Smart mirror.

Choosing your life style and career in IoT Worlds

GPS for dogs. The innovative and safe WHISTLE

Complete Control Over Sounds With The Internet Of Senses

The Advantages and Disadvantages of the Internet of Things

The Top IoT Application Enablement Platform You Should Know About

What You Should Know About Codex OpenAI

HuggingFace AI – How Can You Benefit From It?